Written by Victoria Deubler
Updated over a week ago

The Smart Number is a phone number assigned to your Team when you your Kunversion+ platform launches.

It's a local number to your area, so that it looks familiar when used in marketing materials (on flyers, signs, business cards, etc.).

The smart number is named as such because it knows everything about your Kunversion account. It knows your cell phone, your colleagues' cell phones, which listings are yours, which leads are yours and what their numbers are, and even what happens on phone calls with new leads. It can route phone calls and text messages appropriately to you or to your fellow agents depending on who is calling in, or whom is texting what.

We recommend saving this number in your phone as a contact, so that when it calls or texts you, you know it's the Kunversion system trying to give you a new lead or relaying an important message from or about a lead.

You can view your smart number on your settings page . 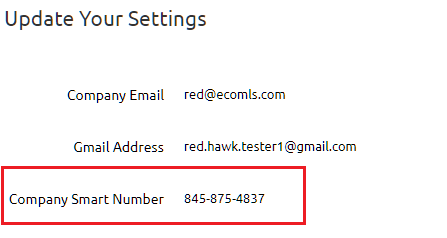 What does the smart number do exactly?

There are many additional features with text messages that can be taken advantage of, especially that it enables you to capture new leads off of any physical or print marketing you can come up with.

The above example references the single word: 'red'. This lead texted 'red' because they saw a piece of marketing that stated, if they wanted access to the mobile app to search local homes on their phone, they should text red to 845-875-4837. As a result, their phone number was captured, and the above text went to the agent this message was sent to.

When the lead sent the text 'red', this is what they got on their end: 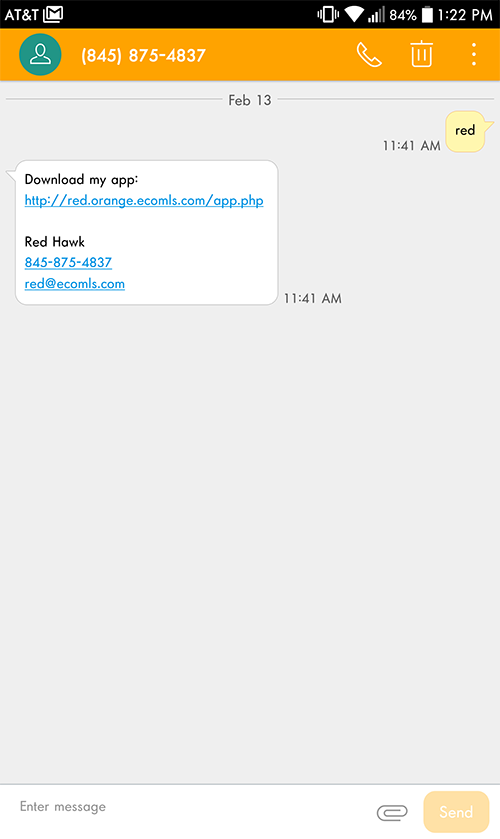 Why is there only one Smart Number assigned to each team/account?

Essentially, for the same reason you only have one office number. The smart number works to intelligently route calls and text messages. If you had a sign out in the world, you would potentially have more than one phone number on the sign, which would be awkward and confusing. The smart number can intelligently route texts and calls according to your preferences to keep everything very simple. Not to mention it's a local number that would be appropriate on signs around town.

Exactly what happens when a brand new lead calls the Smart Number for the 1st time?

After a lead is created, Kunversion+ assigns it to an Agent. If that lead, who signed up, and is assigned to an agent calls in, their call is routed directly to the Agent's cell phone number.

If some random person calls in (who has not yet signed up) then the number routes the call according to the preferences set in your Broker Settings.

If a NEW lead comes in from a 3rd party source (Realtor.com, Zillow, etc.), will the Smart Number call ALL the agents, based on the round robin settings?

If that 3rd party source is a Broker-level source, meaning the Broker ID, or Import Email is used, then the system will call all Agents in rotation to try to assign that lead, if that lead has a phone number. If the lead just has an email address the lead is assigned to the next Agent in rotation.

What are the best practices for an Agent to be using the Smart Number on a daily basis?

Smart Number usage by the Agent is relatively simple, there are a few rules of thumb:

Primarily, you use the smart number in conjunction with custom text codes to generate leads. So, using it on signs, riders, craigslist, business cards, etc is important to open up as many avenues as possible. This does mean specifically that you are always, always prompting people to text in. Text is the best way to capture leads, hands down. You always capture a real cell phone number 100% of the time, and if you provide good info via custom text codes then people will appreciate the service.

Always text leads back via the dashboard. This is to ensure the response the lead gets comes from the number they texted to originally. Eventually after someone becomes a client you can tell someone like "I'm just stepping out of the office, please text me on my cell at: " and go from there.

Always answer the phone if the smart number is calling you. It's trying to give you a new lead. It's the only time it ever calls.

Exactly WHAT questions does the Smart Number respond to if a lead texts it?

The smart number will take the common questions, such as  "Who is this?" and respond automatically. When you mass text, you could get hundreds of responses that are all the same question. When the system does not recognize what the lead has sent, it then forwards that reply to the Agent. So, you will never be replying to a text that the system has already replied to.

If the lead sends in bad phrases (e.g. [eff off]), or stop phrases (e.g. "stop", "off", "wrong number", "unsubscribe", "stop texting", "stop sending") then the system will unsubscribe that person from texts.

Will the Smart Number EVER call a Lead?

If you ever get a voicemail from the smart number, it means you did not pick up in time. Usually this happens because of network lag, and the system does not understand it's speaking to your voicemail until it's too late, then it moves onto the next person.